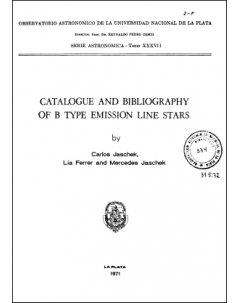 The need for a continuation of Merrill and Burwell’s "Catalogue and bibliography of stars of classes B and A whose spectra have bright hydrogen lines" has been expressed several times by astronomers interested in studies of Be stars. During the twelfth I.A.U. meeting at Hamburg, this need was discussed and we accepted the task of bringing the bibliography up to date. Due to the pressure of other work, this undertaking suffered several delays and it has been finished only now. Although the purpose of the present work is mainly to provide an extension of Merrill and Burwell’s catalogue (MB), several problems came up and imposed a revision of certain aspects of MB’s catalogue. A first problem is connected with the delimitation of the objects to be included in the catalogue and a second problem concerns the extent of the bibliography to be searched. In what follows we will explain what was done with regard to both points.